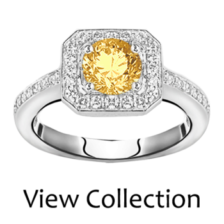 The elegant Citrine. Its name comes from the French word for lemon, citron and they have been underused for so long, but they really are a beautiful gemstone with a great history. They used to be revered for their rarity, which has changed over time, but historically they were important gemstones. According to Chinese legend the Citrine was the Stone of Success. It was used by the Romans in the intaglio rings that were worn by every powerful businessman.
They were favoured by Queen Victoria who championed them into the popular gemstone of her era where they were used in jewellery designs and on Scottish kilt pins and shoulder brooches. They were hugely fashionable during the Art Deco period of the 20th century and were the feature of some elaborate, ornate pieces inspired by the Jazz Age made for Hollywood stars like Greta Garbo and Joan Crawford. Whilst these beautiful stones are no longer rare, they have a rare elegance and beauty and they are starting to enjoy a renaissance. So, choose your citrine and create your own piece of Hollywood glamour by teaming it with, there is a new movement coming – be part of it!

One of the things

Few things are more personal than the jewellery you wear and the fragrances you use in your home. They demonstrate your taste, your style, who you are and what you believe in.
So, if you believe in beauty, elegance, behaving ethically and being unique, Henry Aston artisan collections are designed for you.